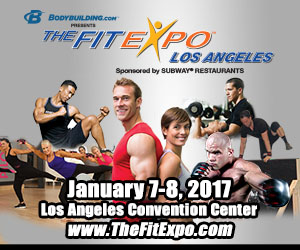 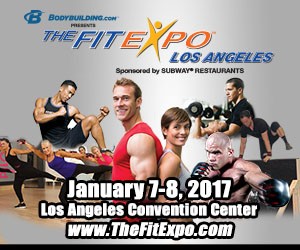 If you’re on the west coast, the LA Fit Expo is the place to be, first weekend of January, 2017 – see you there!

We hope you are enjoying a terrific holiday season. HDPhysiques wishes you a Merry Christmas and Happy New Year! And…. speaking of the New Year…. the bodybuilding industry gets right back in action come the first weekend of January! We encourage you to get out and support the sport and enjoy a little fun in the California Sun by attending the ever-growing LA Fit Expo at the Los Angeles Convention Center. HDPhysiques will be there conducting interviews with the various athletes that our fans of female muscle will find of interest, and we will be making a very special announcement while in LA as well – so stay tuned! Here is the official press release from the Fit Expo – check it out and see you there!

“Bodybuilding and physique events are part of our DNA and are one of the key components of what we offer at the Expo,” said TheFitExpo Executive Director, Erin Ferries. “These athletes employ every principle of nutrition and training coupled with true dedication and passion in shaping their bodies to be their very best.”

Learn from the best as 3X and Current Mr. Olympia Physique Jeremy Buendia and top bodybuilding trainer/coach with 16 Olympia titles, Hany Rambod, appear together for an information-packed seminar on Saturday, January 7 at 2:00 p.m. on the Competition Stage.

On Sunday January 8, two special events are not to be missed. At 1:00 p.m. on the Bodybuilding Stage will be the Return of Champions seminar, hosted by Hall of Fame bodybuilder Shawn Ray. This special Q & A panel will include powerhouse greats: Dennis Newman (Former Mr. USA), Gunter Schlierkamp (IFBB Pro Bodybuilder), Samir Bannout (former Mr. Olympia), Chris Cormier (4X Pro Ironman winner) and Flex Wheeler (Former Mr. USA). Following at 2:00 p.m. on the Main Stage will be the National Physique Committee’s NPC Seminar, where competitors of all classes can learn about judging criteria and pick up some invaluable competition tips.

TheFitExpo offers something for everyBODY! Attendees will find over 100 fitness and sports celebrities as well as 20 amateur, professional and attendee competitions and over 700 exhibits offering the latest in fitness, diet, nutrition, strength and wellness products and services. During both days of the Expo, many leading fitness professionals will be presenting educational seminars and demonstrations on subjects such as proper nutrition and dieting and exercise philosophies.